It is so easy to confuse Caraway seeds and Cumin seeds based on their appearance but these two are not only different in their taste but also uses for cooking. 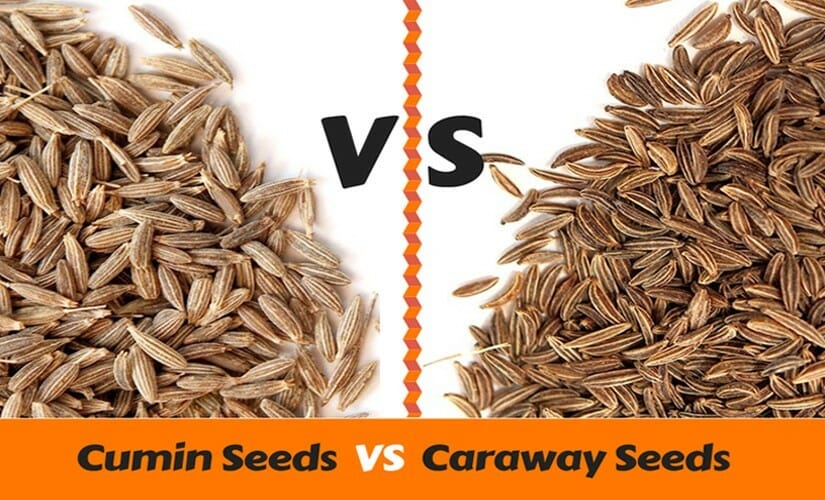 Have you bought a spice by looking at the shape and colour and not read the label, only to realise later that it is the wrong type of spice !?

This is easily done when you have  two  similar looking spices  and in this case its cumin seeds  and caraway seeds.

They may look like siblings but are not even of the same lineage!

The subtle difference between caraway seeds and cumin seeds in their colour and appearance is what makes them the most commonly confused spice.

But fear not, you do not need to throw away or neglect any of them when it comes to using the spices.

They are very flexible and the uses of caraway seeds and cumin seeds are many fold!!

There are different types of spices that look like tiny seeds.

Few that resemble each other in appearance are:

Although they look the same but belong to different families.

These tiny little seedy cousins are in effect far from being related yet easily confused by many.

The other spice that is unknowingly used by many is the difference between fennel seeds & aniseed.

In my early culinary venture into the kitchen, I too was unsure of them these twins.

I was convinced that they were an exotic species of cumin seeds that came in different colours, just like the colour variants of Green and Black Cardamon.

One wrong buy of Caraway seeds mistaken to be cumin seeds clarified it all!

It tasted absolutely different and surely was not the right fit for most Indian dishes I wanted to make.

And hence started my spice trial!!

Where do Caraway Seeds and Cumin Seeds come from?

Both Cumin seed and Caraway seed appear to be visual twins with a slight difference in their colour or shape.

This creates confusion in the mind of us homecooks who simply pick up a bottle or pack of caraway seeds thinking that it may be a different name for cumin. ( Basically many me’s)

In Switzerland, non-German or French speakers fall prey to this as they assume caraway to be the German/French word for cumin.

And to make matters more confusing, the German names of the two spices are also very similar. Caraway seeds are known as ‘Kümmel’ while Cumin seeds is called ‘Kreuzkümmel.’

I know I know no one said life was easy … so why should choosing a tiny spice be?!!

What hit home was the Hindi (Indian) name of caraway seeds is called ‘Shahi Jeera or Shah jeera’.

Shahi Jeera as one of those mysterious spices used to make special dishes that add an earthy Royal touch of flavour like this Mughlai Chicken Rezala dish.

Further research indicated that the plant sources of the two spices are also different.

Cumin seeds are the dried seeds of the herb plant known as Cuminum Cyminum.

While Caraway seeds are the dried seeds of Carum carvi plant.  (Don’t think I will ever refer them like that, but mentioning the scientific name makes me sound so knowledgeable 😉 ! )

Surprisingly, nearly a third of the world’s supply of Caraway seeds come from Finland where they are mostly grown.

So the source of origin of the body double spices is the first indication that they are indeed not related and born to different families.

Are Caraway and Cumin Seeds different in appearance?

The reason I picked up the wrong kind of seeds is not only because of the similarity of their German names but also their similar looks.

Caraway seeds is darker in colour when compared to cumin seeds.

Some confusingly refer to caraway seeds as black cumin due to the darker colour.

This too is misinformed as the actual black cumin is Nigella seeds.

Caraway seeds are dark and light brown zebra type stripes on their skin and is smoother to touch.

The shape of a caraway seed also tends to be slightly curved and bendy. They can be smaller in size to cumin seeds as well. However, the difference in size is not always guaranteed.

Cumin seeds are light brown in colour and have relatively a rougher surface. The colour is more even without the darker stripes. It does not have the curves like caraway seeds and are more linear in shape.

So in body shape type one is curvy while the other is oblong!!

Uses of Caraway seeds and Cumin seeds in cooking

The use of Cumin seeds in cooking can be traced back to the Mediterranean and Iranian regions.

Cumin seeds are also increasingly popular in Latin American, African and Middle Eastern cuisines.
It is impossible to think about Indian cuisine without cumin seeds.
It is one of the most essential Indian spices that form the basis of many Indian curries, dishes and spice blends including Garam Masala.
Cumin seeds can be used both in powder and whole seed form for making meats, rice and many vegetarian dishes both Indian and international.

Crushed whole seeds are also added to breads, cheese, biscuits and to also to baked goods for cumin flavoured taste.

You can read about the different uses of cumin seeds in this post here.

Caraway seeds, on the other hand, is popularly used in Central and Eastern European cuisine particularly Germany, Finland, Sweden, Poland and Hungary.

However, the use of caraway seeds has overflowed to other cuisines as well.

It is one of the main ingredients used for making Rye and Soda Bread.

It is also used to cook curries, sauces, flavouring and even as a pickling spice.

The infographic below classifies the difference between cumin and caraway  and their uses in cooking in one glance.

How does Caraway seeds taste different to Cumin seeds?

Even though the two look similar, their flavour is different.

While caraway seeds have a strong aromatic flavour, the flavour of cumin seeds is milder.

The taste of Caraway seeds is something akin to liquorice and it’s more nutty and earthy compared to cumin seeds.

The taste tends to be a bit sharp and to some extent slightly pungent.

Cumin seeds fall under the sweet category of spices and are mellow to taste when cooked or eaten raw.

As the flavour of cumin seeds is not overriding, it makes a great base spice for many spice mixes, sauces and curries.

Can you substitute Caraway seeds with Cumin seeds or vice versa?

Now  we know that the flavour and taste of caraway seeds and cumin seeds are both different which means they really cannot be used as substitutes for each other.

If however the recipe calls for caraway seeds and you do not have any then the best caraway seed substitute is using fennel seeds, anise or even star anise.

Spices such as star anise, fennel seeds and anise belong to the liquorice family and have similar taste and flavour and can be easily substituted with the other.

Since cumin seeds are more of a flavouring spice used for tempering dishes or add flavour to baked goods you can choose to omit it from the dish if you wish to.

The closest substitute for cumin seeds is to use cumin powder or coriander powder.

Using cumin seeds to replace caraway seeds is also a common practice, but do keep in mind that the flavours of the two are different and will give the dish a different taste, which is not that unappetising!

Where to buy Caraway and Cumin Seeds from?

Both these spices are readily available in most large supermarkets these days.

Although you may find Cumin seeds to be the more popular of the two when it comes to shelf stocking.

Your local Indian store or ethnic store will surely have these.

Other than the traditional stores you can also order them online. Here is a list of few online store options for you: 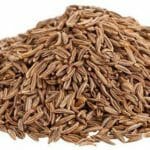 When it comes to buying and using caraway seeds and cumin seeds it’s important to remember that both have different flavour and taste.

Since they look very similar to each other, pay attention to the package and the colour of the seeds when buying.

Although not the best substitute for each other, it will not kill your dish if you do happen to replace one with the other.

Have you ever got confused between caraway and cumin seeds and bought or used one for the other?

Let me know if there are any other spices you get mixed with. Will write something up for sure!

cook with spices, Spices With Benefits,

Masala Chai Benefits And Is It Different To Chai Latte?

SIGN UPP to Get my Flavour Formula for EASY LAZY COOKING!!